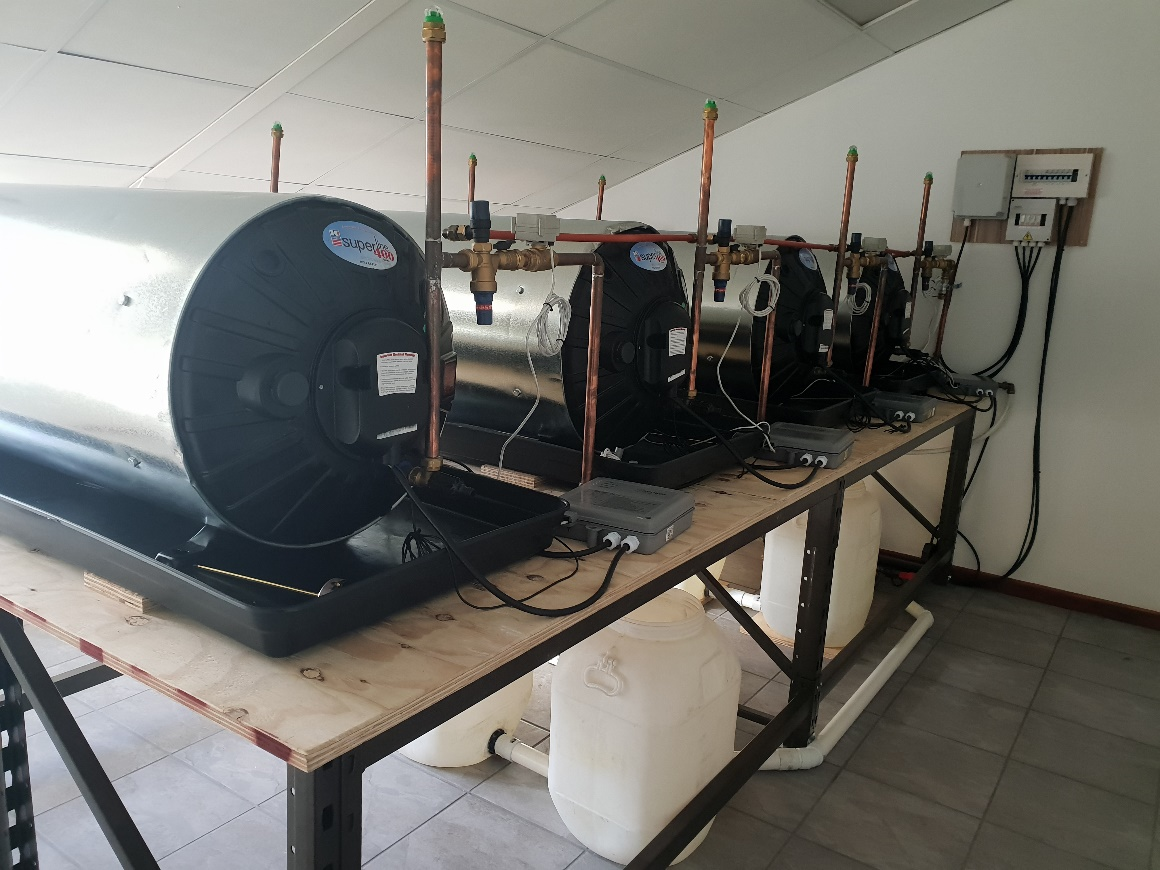 Various sources, including Eskom and Kwikot, have long argued the value of managing one’s geyser set-point temperature and turning it off when not in use. Some suggest a schedule can make a difference, while others argue this has no effect. Either way, none provide practical, controlled, real-world experiments to prove this one way or another.

At Sensor Networks, our geyser controller provides customers with full control over their geysers – when it heats, and to what temperature. We decided to run a series of controlled experiments in the Sensor Networks geyser lab to show exactly how much electricity can be saved by managing your geyser using our app.

The experiment consisted various phases, where insights gleaned from one phase guided what was tested in the next.

In the first phase, which ran over a period of four weeks, 50 litres of water were drawn from each of our four test geysers each day (25 litres in the morning and 25 litres in the evening) – a series of water storage tanks and an electric pump ensured that no water was wasted. Two geyser temperatures were tested, 70oC and the Sensor Networks Optimal Temperature (SNT). Additionally, two heating schedules were tested, one with the geyser set always to heat, and one with only two hours of heating a day – an hour in the morning and an hour in the afternoon, prior to drawing water. The two hours of heating were always sufficient for the geysers to reach their target temperature.

The table below shows the average daily energy usage of the various settings over a four-week test period.

In phase 2 of the experiment, we tested how the volume of water drawn can influence savings achieved through a heating schedule. This was as a result of not being able to run phase 1 for a week due to COVID-19 restrictions, where we observed reduced savings when no water was drawn from the geysers. The table below shows the savings achieved through implementing four hours of heating per day for various volumes of daily water usage.

We noted the savings achieved through a heating schedule (in percentage terms) was independent of the volume of water drawn, unless no water was used. We also saw the savings were higher in this phase compared to phase 1. The main difference was a longer heating period due to the larger volume of water being heated. This suggested the heating schedule could be refined to improve savings.

In phase 3, we tested heating schedules that heated before and after drawing water from the geysers; previously, heating had only been done before drawing water. The following table shows the savings achieved when drawing 25 litres every morning and 25 litres every afternoon.

On average, the saving achieved was far lower, indicating that allowing heating during and after drawing water is less energy efficient than only heating before.

In phase 4, we combined all the insights gathered previously to test the overall savings that can be achieved. We tested two settings:

The table below shows the average daily usage observed when each setting was applied to each geyser for four days.

The average savings achieved by using SNT with four hours of heating a day compared to 70oC with no schedule was 37%. Since we know reducing the set-point temperature from 70oC to SNT lowers consumption by approximately 30%, we can conclude that implementing the heating schedule of four hours per day lowers consumption by approximately 10% – a slightly more effective energy reduction than the two hours per day heating, and closer to our phase 2 observations. Worth noting is that the savings observed in week 1 of this phase were more significant, with total savings of approximately 40%, meaning the heating schedule saved approximately 14%. This indicates the savings may be slightly affected by the geyser used or other factors such as the week’s weather.

Through this experiment, we proved that implementing a heating schedule and lowering the set-point temperature of one’s geyser can reduce average daily usage. The optimal heating schedule will heat prior to draining water from the geyser. Additionally, the percentage saving achieved is independent of the volume of water used – indicating potential savings for all households. The highest saving achieved in our experiment using both a schedule and reduced set-point temperature was approximately 37%, with up to 40% observed in some cases.